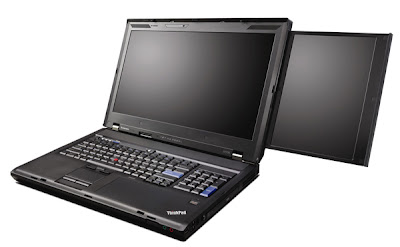 I would love to see a dual display laptop or a triple display laptop produced at a low cost and at a thin design. This photo right here shows my best thoughts on this. But we’ll come back to that.
You could easily do this in today’s technological movement. You don’t believe me? In this video here, we see a rendering of a folding triple display laptop. I don’t like it one bit! But it shows a concept that can easily be invented. Something like this was created also in the pc-laptop manner seen here. It’s…stupid. Not only the size and device…but this folding stuff means that you can’t enjoy just one screen if that’s what you please at a given time. A sliding display is just…the solution. An example of a dual display laptop that actually looks pretty normal is the one from gScreen. 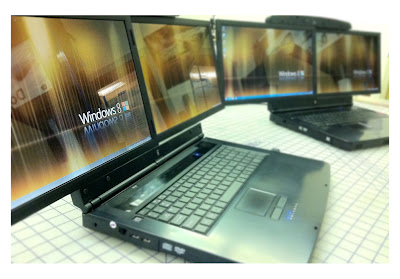 It’s called a SpaceBook and it was designed in 2003. It has a huge price of $2399 and it just ain’t worth it. I mean, if you have the money…it kind of pays off because of it’s crazy capabilities (i7 quad core, 8Gb DDR3, 1Gb Nvidia GTS 250M…and so on). Seeing this gives you a good idea about the future. See a demo video, here.
I just thought about this thing, googled it and…it exists! But I’m not fully impressed. What I imagined was a triple slide display laptop, all built into a thin design. I would love a dual display laptop as well but it must be thinner and cheaper. This could be made possible by using LED technology or by using other of the next generation stuff. There would probably be an issue with the battery life time yet I don’t really think that would be the biggest problem that could occur. Maybe we could also stop building atom bombs and build some good batteries for our devices. That would be great.
Anyway, I would totally buy something like this and for people like me (people that just can’t do one thing at a time) this is an absolutely-must technology! Hope we’ll get there soon.