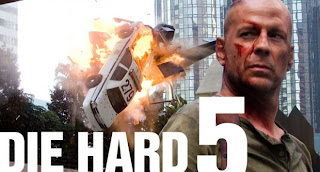 He’s baaack. Yes, joienegru is back with yet another review! And also…Bruce Willis in a new Die Hard movie…whatever.
p.s. Don’t worry, there are no spoilers.
First of all, let me make a short review of the Die Hard series. Each movie from the series is a full action type movie, where if you were to be a character in the movie, the suspense would’ve been just one of the dozen things that could kill you.
It all started with 1988‘s Die Hard. The first movie of the series, directed by John McTiernan and based on the novel Nothing Lasts Forever by Roderick Thorp (1979). Since then, to the actual Die Hard 5 movie, the original characters from Roderick Thorp’s book were kept. It was a big success movie where Bruce Willis, playing as Officer John McClane, was still funny as always and was still complaining about terrorists and them ruining his vacation. The second movie came out in the year 1990. It was produced by Renny Harlin and it was based on the book 58 Minutes by Walter Wager (1987). The third movie was produced again by the same John McTiernan in 1995. It was written by Jonathan Hensleigh and they kept some original characters by Roderick Thorp as always. After this movie, it all remained a trilogy. Bruce Willis had already a ton of acting to do in his other successful movies from the time. But then, the year 2007 came and Mark Bomback wrote a screenplay for the Die Hard 4 movie. The original characters by Roderick Throp were kept of course and the director was chosen probably because of his inspiring name: Len Wiseman. It was a poor movie compared to the other ones but still a spot on action for the type. John Moore produced the last one in 2013 which was written by Skip Woods.
So let’s conclude:
Die Hard 1: 1988 | Die Hard 1
Die Hard 2: 1990 | Die Hard 2
Die Hard 3: 1995 | Die Hard: With a Vengeance
Die Hard 4: 2007 | Live Free or Die Hard
Die Hard 5: 2013 | A Good Day to Die Hard
If a new Die Hard movie will ever appear, it will probably take the name of one of Conan‘s funny show titles: Let’s Not Die Quite So Hard, I’ve Got Chronic Back Pain.
So about two days ago I went with my pain in the ass girlfriend (she deserves it) at a local Cinema. Actually, in my city, Constanta, we have just one Cinema, the one in the Tomis Mall, called Cityplex. We used to have a bunch of cinemas (state cinemas) but you know…capitalism was introduced, corrupt business was introduced, and so on. We also have a new Cinema in another mall of course, but it’s a bit expensive there and it’s way out of the city center area.
We went to see the new Die Hard movie of course and I’ve read about it on imdb.com. There was this guy, that was not impressed with the movie and with the characters and with the CGI effects… I was like „oh, man…”. But also, he was talking crap. Like…”since when did John McClane had a son?” Well, since the first Die Hard movie: a son and a daughter.
So I went to the cinema and expected the worst, although I prayed that Bruce Willis being in it will kind of save the whole thing. From the start it was pretty cool, there was a new story, and a new mission but we as the audience got it, we were introduced to it slowly. Then a twist, then some humor, then some cool but very cool explosions and accidents. There was like a big GTA scene, and cars flying all around, that’s my favorite part of this movie. I mean, what can you not like about it? It’s not your typical „boom boom, explosions everywhere and that’s it” kind of movie, it’s….it’s…well, it’s Russia! Before I went to see this, I saw a funny bit from The Daily Show. I wrote about it right here. If you watch that second video and then go see Die Hard 5, you’re going to have a fun time. In Russia, it is actually possible to witness a lot of the damage seen on Die Hard 5, plus there’s no stupid helicopter scene like in the Die Hard 4 movie. Well, there is a helicopter scene in this one too but…it’s pretty cool and more believable (and more intense). There are not that many jokes spread around this one and there are not that many bad sides to the movie. It’s a good old fashioned action movie with the plus side that it’s a Die Hard movie.
I really loved it and when I got home, I even watched the first Die Hard movie, just for the hell of it. I truly recommend this movie, especially for those who had seen all the parts and for those who don’t have a big stick up their ass. Don’t trust the fake criticism, don’t watch the boring trailers, just see the movie!